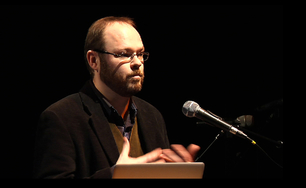 Rudmer Canjels is an independent media historian, lecturer and film archivist. He has given various courses for Comparative Arts & Media Studies at VU University Amsterdam and Arts & Culture Studies at the Erasmus University in Rotterdam, e.g. on transmedia storytelling, paratexts, documentary films, the representation of the artist, re-mixing, and participatory fandom. He received his Ph.D at Utrecht University for a study on the international distribution and cultural transformation of silent film serials, and he has published various articles on silent film serials and seriality, as well as Distributing Silent Film Serials (Routledge, 2011).
He has collaborated on the production of several documentaries for A History of Royal Dutch Shell (Oxford UP, 2007) as well as researched Shell’s own cinematic history in Films that Work (Amsterdam UP, 2009). For the HERA project TEF, in collaboration with VU University and the Netherlands Institute for Sound and Vision, Canjels has researched the industrial films of the 1950s and 1960s, focusing on the construction of a collective imaginary of innovation and technology. His monograph The Dynamics of Celluloid on the industrial films by Unilever and Shell made in Nigeria while it became an independent country is published by the Netherlands Institute for Sound and Vision.
His interest in industrial film continues in research on the visual language of the steel industry, while a new focus on the history of cinematic cigarette cards is being explored as well. Recently Rudmer Canjels has finished an important project for Royal Dutch Shell identifying, cataloguing and preserving of over 2000 films, in collaboration with Eye Film Institute and the British Film Institute.

- “The book provides new insights into the serial productions of both well-known [such as Abel Gance, Erich von Stroheim or Fritz Lang] and more obscure directors. […] Distributing Silent Film Serials is supplemented by thorough notes, a well-chosen bibliography, and a useful appendix, listing serial films, chronologically arranged under importing country and by earliest known premier date. The text is complemented by many interesting photographs, posters and advertisements […]. It is packed […] with interesting anecdotes and solid information, and serves as a welcome addition to the burgeoning body of important literature elucidating the history of silent cinema.”
(Jeffrey Mifflin, Historical Journal of Film, Radio and Television, 33:1, 2013)

- Distributing Silent Film Serials is part of the “important studies of exhibition [that] have recently emerged from what has been called the ‘new cinema history.’ ”
(Jessica L. Whitehead, Early Popular Visual Culture, 13:1, 2015)